That has been my delectable menu for the past week. I wish I could say it was some new celeb diet fad I was trying out to shed the five pounds accumulated over the two historic snowstorms of the winter. It wasn't. It was, simply and delicately put, degustation for the debilitated gut.

For someone who is rarely sick, being out of action for a whole week was a major annoyance to say the least. But what was worse than not being able to assume full control of my body and move it the way I usually do, was not being able to smell, taste and consume food. By food, I mean, real food.

It would not have been as bad subsisting on crackers and bananas if I had been able to actually enjoy the act of eating them. Some crackers are actually quite tasty. As if it wasn't good enough for the nasty bug to take over my body, it has decided that while I was playing host to it, there should be no pleasure to be derived from consumption. The bug in question (I wasn't sure if it was viral or bacterial) had me rewired into a Pavlovian anti-foodie. If I so much as contemplated a morsel of real food, the very thought would trip a series of switches to the "eeew" alarm, setting off piercing screeches in my head. Now, that is some serious rewiring to my system.

Like all true blue born and bred Singaporeans, I love my food. But beyond the manic obsession over which Boon Tong Kee joint serves the best chicken rice, I really love my food (like the way I love poetry). If that old cliche was to be asked, I would unreservedly put myself in the group that lives to eat.

To eat is to savor life with its palette of delightful flavors. Food is one of two common passion in most cultures around the world. I believe you can't really get to know a culture until you've tasted its food. I've made it a point in all my travels to eat local. I have my limits when it comes to exotic animals, but unfamiliar smells and flavors do not turn me off. So I've sampled fermented bean curd (the Chinese name is literally translated as 'smelly bean curd') at the night markets in Taipei. It wasn't as pungent as I thought it would be. But that is what I like about trying new and different foods. It's often not what one thinks it would be. I was eager to try Gudeg, the traditional Javanese dish, my first time in Yogyakarta. It is made from jackfruit and said to be sweet. I loved jackfruit so I thought I would absolutely love the dish. Let's just say it wasn't really to my taste.

What is almost always to my taste, though, is spice. Yes, I like it hot. Hotter than Marilyn, and spicier than Girl Power. Having grown up with chili padi and sambal belacan, tabasco sauce is like fairy dust to me. Someone once asked me if I would like some soup with my pepper. I would have, if it was good soup and not processed, canned glob. The only time I came close to burning up from the hot stuff was eating Manadonese food for the first time. That is because Manadonese food does exactly just that -- burns you up from the inside. It is not only extremely spicy, it is also full of spices, creating a blend of layers and layers of flavors that defy description by words. It just simply has to be savored.

One of my fondest memories of living in Jakarta is that of the
bunga pepaya ('papaya flower') dish at Beautika, the Manadonese 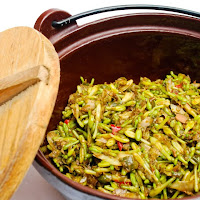 restaurant that my girlfriends and I loved to lunch at. With each
mouthful of the deceivingly delicate looking buds, I would feel
the heat spreading inside my body. The first taste tingles and lingers
on the tongue. But already, the fire is ignited within. With each
subsequent spoonful, the second, third, and fourth, the desire to
savor more gets more intense. Ten minutes into the meal, I would
be completely addicted. Alternating between rice and water for
temporary reprieve from the fierce burning that had taken over
my senses, I would be screaming silently: "Stop! No, don't stop!"
The ultimate release and pleasure would come finally at the end of the meal, when every last bud has been devoured. This is the best kind of food lust -- a sweaty, unbridled affair, with absolutely no need to look pretty while doing it.

So you see, I really do love my food. A week without my taste buds is sheer torture. It's time to take charge, and kick Mr Bug out of my life, so I can be free to love my food again.
Posted by Unknown at 12:07 AM