Why do we study history, if not to make a better future?


That was the thought that filled my mind as the documentary A Film Unfinished came to an end, and the shades over the windows rolled up along with the credits in the film, to reveal a magnificent sunset. The film, about a Nazi propaganda film about the Warsaw that was never finished, was probably one of the most intense I've ever seen, along with The Conscience of Nhem En (about a photographer who documented the Khmer Rouge genocide in Cambodia).

It was the end of the first day on the FASPE journalism program and we had spent the day in discussions and seminars on the role of the press during the Holocaust and covering conflict. We had also been taken on a tour of the Jewish Heritage Museum in New York  by a Holocaust survivor from Poland. We were warned that the film was hard to watch, but even then, there was a cloud of silence hanging over the room for a few minutes when it ended.

I'm hardly ever at a loss for words, but in that moment, I was only able to come to terms with the horrific images I had just seen, by capturing images myself. I grabbed my camera and shot the sunset through the window. Being behind the lens made me feel safe again, even as the questions and thoughts were racing through my head about the people who shot that film in the ghetto, of the dead and dying, and the one man who recounted the process in an interview years later.

Strangely, I felt like I could understand how he could have done it...just stayed behind the camera and shot the scenes, and fall back to the concerns of the craft (i.e. was there good lighting, etc.) instead of addressing the moral and ethical issues of being an apparatus to documenting atrocities. Of course it's morally wrong. I'm not saying it's right. I'm just saying that for a split second, I felt like I could get into the mind of the person behind the camera. In a poetically ironic way, it was through an appreciation of beauty, that I could almost fathom the depths of horror the human soul is sometimes capable of.

I've always loved sunsets...because they signal to me that there will be another glorious sunrise the next day. Why study history, if it isn't to make a better future? 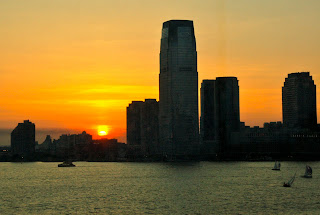